A great evening of racing was had were the lead changed a few times in the first hour of racing. Chris Boyall shot out of the gate to lead the pack up the fire road before Erin Baxter took the lead on the first couple laps. Erin, who is not a club member and not eligible for a podium place was then overtaken by Josh Roy who held onto the win despite some decent bark being taken off.

28 riders battled it out in the heat early on and judging by the amount of red fluid on peoples arms and legs on the podium, there were a few ‘offs’ on those dusty corners. Greg B grabbed half our ice from the esky to soothe his sprained wrist when coming off on a “uphill” so I think the heat definitely made people go a bit dizzy

Note: the first lap times (and total race time) are about 7min less than should be due to both laptops not being sync on same time.

Thanks to our race sponsor AP Delaney & Co. for their continued support throughout the year.

Russell and Josh showing off their scars. 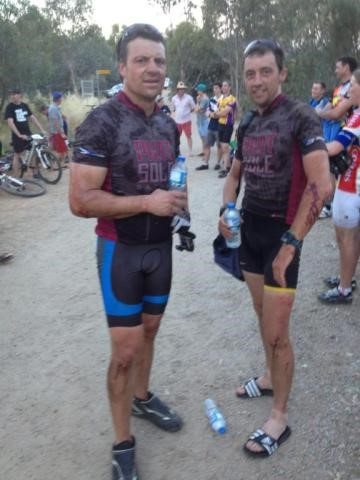 Thank you to our Sponsors